Bring on the Beef 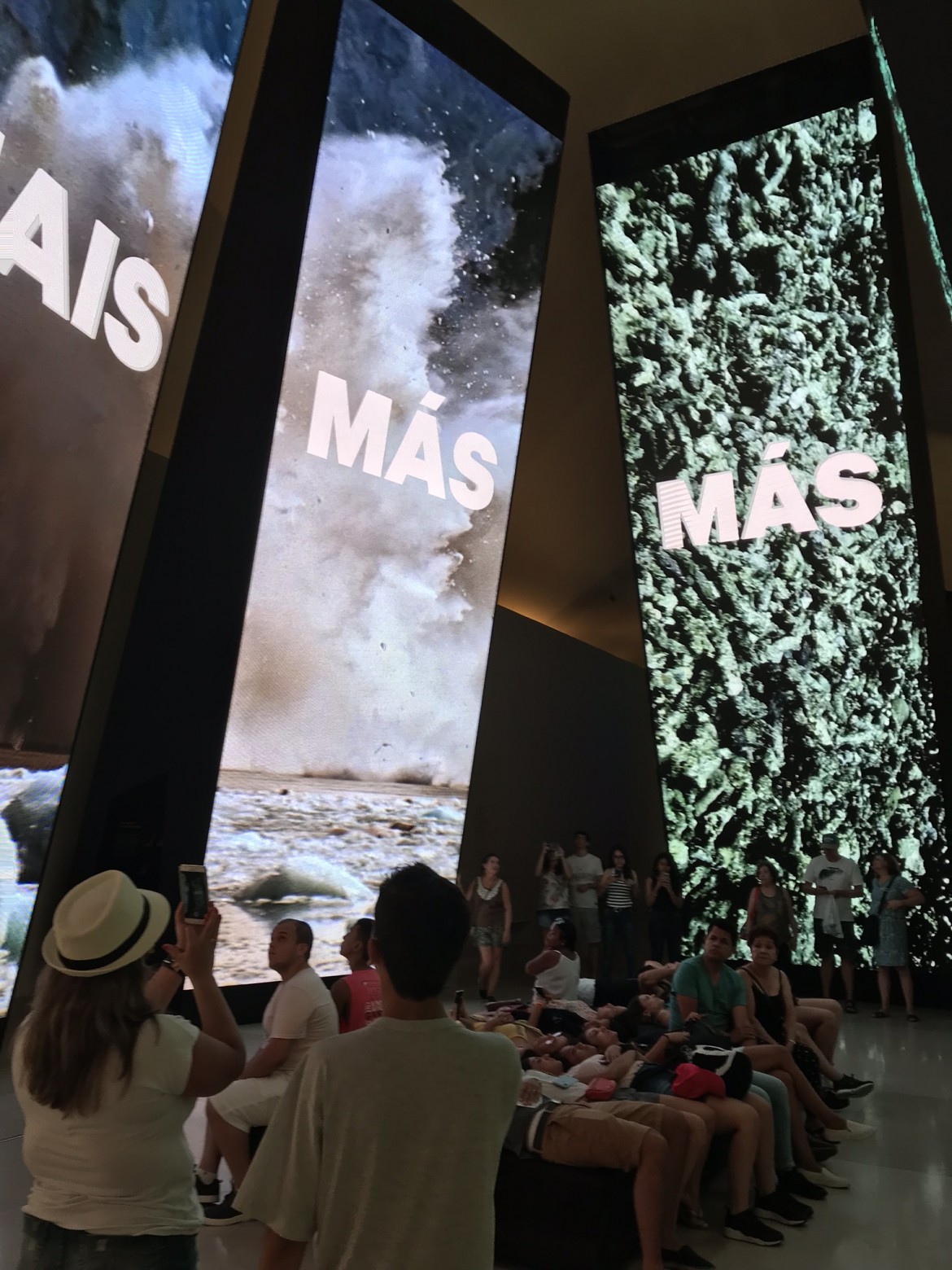 The featured image was taken inside the Museum of Tomorrow, an extraordinary experience. Very difficult to photograph. What you are looking at is a rotunda that contains six floor to ceiling screens showing rotating films about the impact of population growth on the planet. This is only one of fifty or so permanent exhibits. It is not all doom and gloom. The message is that collaboration between nations is what will save us as a species.

Today I fly to Montevideo. Must say I am looking forward to being able to understand a language again. Three weeks of not being able to read menus or carry on even the most rudimentary conversation has been wearing. Portuguese and Spanish have nothing in common. But my other senses have been sharpened. To say I have made friends would be an overstatement but I did develop several nice connections – with the hotel staff who in every city looked out for me. All approved of my street outfits, meaning dressing in a manner that made it less likely I would get robbed and telling me where I could not walk and must take a taxi or Uber. Since I ate at the same restaurants for a week, the waiters knew me and gave me good tables and service. When I told all of them last night, making motions with my hands of flying away and shaking my head no see me again, they understood and all of them wanted to hug me. Such lovely people these Brazilians. And what a hard life they are having now.

My first posting about Rio pronounced it a dump. And out on the streets it is. Uncollected garbage abounds, homeless people set up house, the stench of urine and unwashed bodies is redolent. But folks control what they can. If they are employed, they are immaculate and the interior of their restaurants, hotels, stores are very clean. The country is in a grave recession, homelessness has soared since the Olympics and the hope that all the infrastructure built to accommodate the Olympics would translate to a better economy for the local population failed. The streets are dirty because the city has no money to clean them. Actually, the Washington Post had a good article in today ‘s paper on homelessness in Copacabana beach and how this problem is affecting the well heeled who live there.

The highlight of both Salvador and Rio was being able to glimpse life within a Favela. The last night I was in Salvador the hotel owner asked me if I would like to attend a Candomble religious ceremony. Indeed I did. He arranged for a driver to come get me and we drove across town to a Favela where there was a temple holding a service. It was three hours long. The driver deposited me there and left, which disturbed me a bit but people inside were so welcoming I relaxed. The first hour consisted of people gathering into a room, then one by one they stood and formed a circle, dancing to the beat of a drum. The music gets more intense and soon, someone “catches a saint” and falls to the floor or wails. After the person is inhabited, someone not in the circle comes and wraps the person’s head in a white cloth and s/he is led out of the room. Then there is a food break. Since all the food was cooked, I ate it: okra sauce over rice, roast chicken and corn. You wonder how they can prepare restaurant sized meals in such a tiny space. It was good. And they served wine, made of sugar cane. The third hour, the ones who had been inhabited by a saint came back into the room dressed as their saint, or “orixas,” and they dance for another hour giving praise and thanks. The orixas are saints brought over from Africa. They are worshiped along with the Catholic saints. By the time it was all over, my driver appeared. I was welcomed but it was made clear to me I must not take photos. Such a privilege to witness.