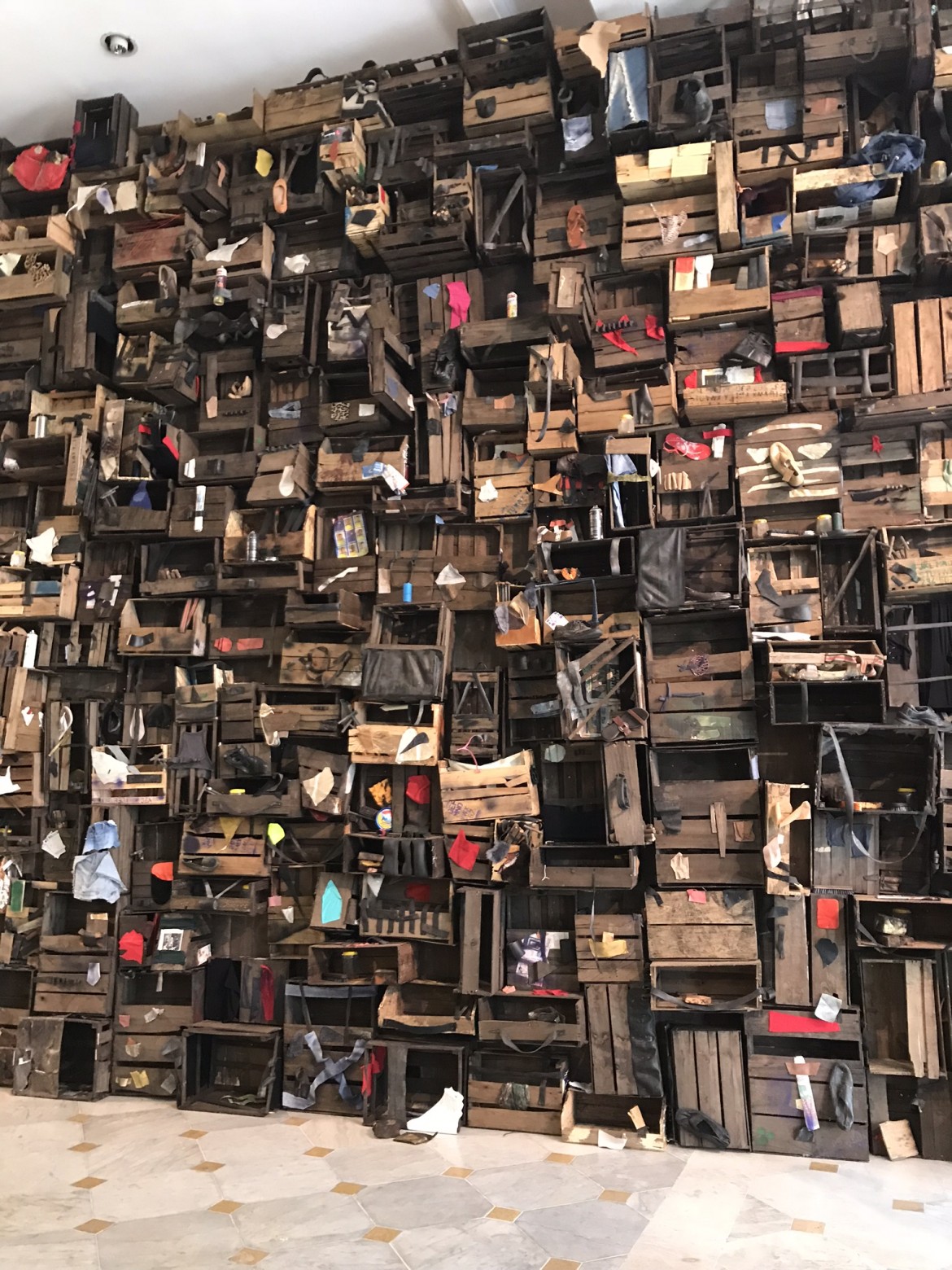 The featured image is of an exhibit currently in the downtown Rio Bank of Brazil. The artist is Austrian. Using shoeshine boxes, he shows in this massive sculpture his impression of the Favela: impenetrable, forbidding, and imprisioning.

Well portrayed in the film, City of God, the first Favelas in Rio were a scramble to find housing after an internal war in the early 1900s, leading to migration from Northeast Brazil seeking better opportunity in the south. As well, City planners displaced thousands of Rio residents in order to build beautiful boulevards in the town center. People had no choice but to take to the hills. Favelas did not start as slums, but now they are and there are 1000 of them in Rio, from 20,000 up to 150,000 residents in each. All favelas are ruled by drug lords and life in most is limited. Murder between rival gangs and tuberculosis are the most frequent cause of death.

Last September, all tours to the “friendly” Rio favelas were suspended due to visitors not obeying the rules and drug lords imposing sanctions, as in seizing cell phones and in some cases opening fire. Starting in January, 2018, there are few favelas where tourists may enter again, the smaller ones. The rules are strict: you must be with a guide who lives in the Favela and is approved by the rulers. You must walk only in the alleys led by your guide. You may not take photographs. Follow these rules and you will be safe. Disobey and you are likely as not to get shot. You are constantly being watched. Criminals do not want to be photographed; but they like tourists to give money to the favela for improvement in the lives of children.

The Ipanema subway station, the toniest beach in Rio, also serves as the entrance to a favela known as The Museum of Favela. The street address is 200. What this means is that mail for the 20,000 residents of 200 X street is all delivered to this one mailbox. The postman does not go inside. A big surprise for me is the favelas have the best views in all of Rio, except from the top of Sugarloaf. We were allowed to walk all the way to the top, through narrow alleyways, steep concrete staircases in order to reach the museum. It was a grueling, hot walk but afforded me a peak at an unusual way of life. The majority of the inhabitants never walk outside their narrow street and have never been to the beach even though they can see the sand and water from their house. There are very small pizza shops and even smaller cafes to gather to drink beer. Water and electricity were unavailable until 2008. Children play games in the alleys and there are small rubber pools for the youngest to splash in. I observed paper diapers and pacifiers. Lots of laughter and rap music. And yet the feeling of claustrophobia is palpable as well as the futility of betterment. The residents looked well fed enough but the children’s eyes looked wary and old beyond their years. That there is value in the Favela in childhood education is encouraging. I left feeling humbled by all the gifts I have received in life.

I signed up for another Favela tour, Santa Marta, the one visited by Michael Jackson and Madonnna, but this morning I got an email from the tour company saying they were suspending the tours again, that security was not good enough. I did not feel unsafe yesterday. I was worried about being bitten by a rabid dog, though. But I reasoned that a rabid dog would instantly be shot since guns are easy to come by.

I am having trouble getting my photographs to upload in the body of my blog. My blog manager is on vacation so hopefully next Monday she can help me figure out the glitch.