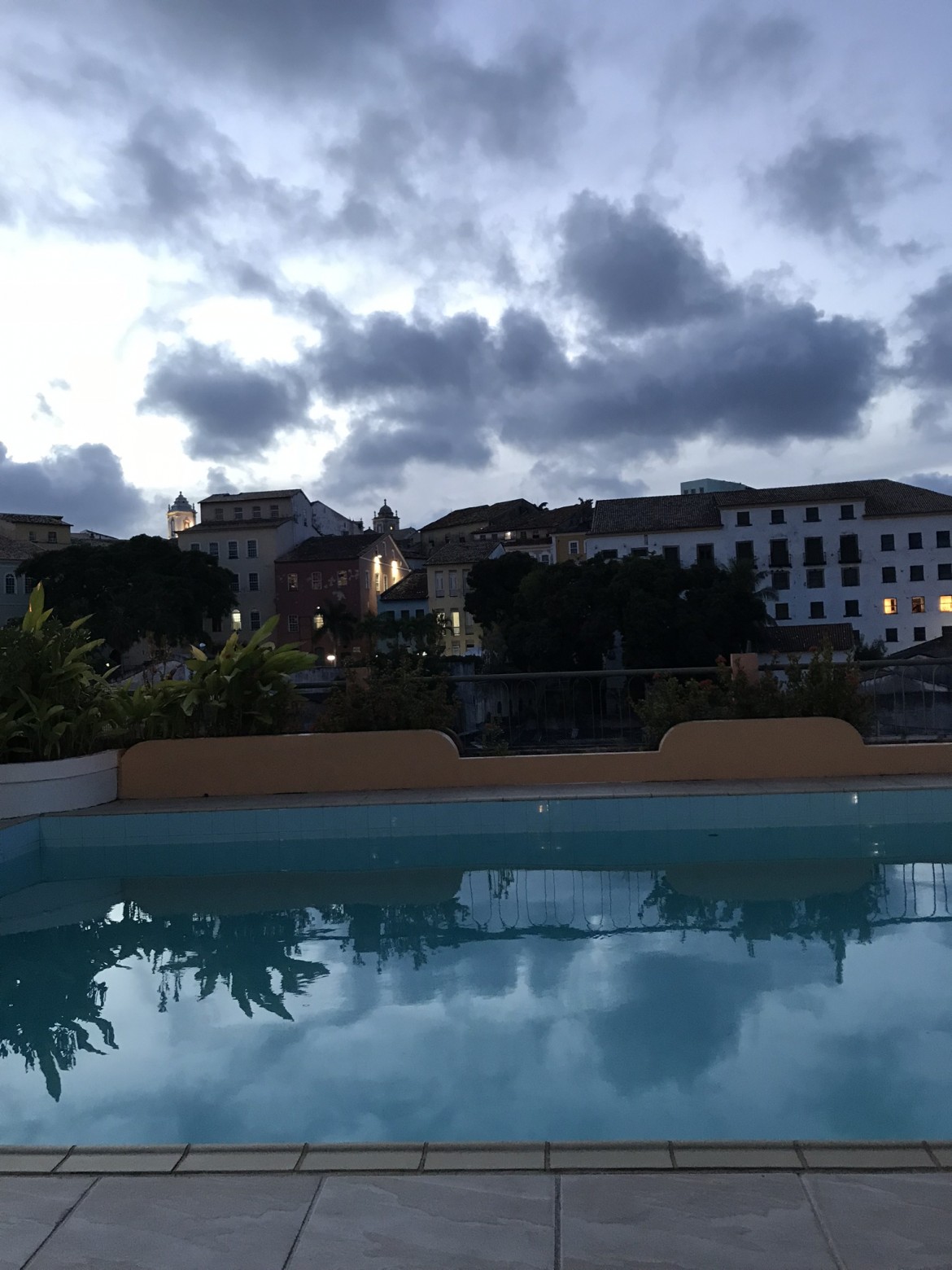 In the film, The Sheltering Sky, actress Debra Winger has a conversation with someone in a rail station and says, “we are not tourists, we are travelers.”  There is a difference. When I went on formal tours to Machu Picchu and Patagonia, I was a tourist. All energy was devoted in getting from one attraction to the next, meaning being packed and in the lobby by 7 am to pile into a bus and drive for two hours until the breakfast stop. And so on until the final stop at 8 pm for dinner and bed. After two of these peripatetic  trips, I vowed to never do it again. I prefer being a traveler, meaning I set up house keeping wherever I am and go through my day as I would at home only in a different location. I stay in hotels that fit my style.  The Pousada is perfect.  The featured image shows the hotel pool where one can sit and sip coffee in the morning or watch the sun set behind the old city in the evening.  Breakfast is buffet style and served from 7-10am: 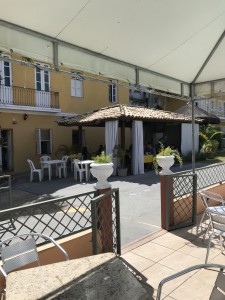 Here I am sitting by the pool and taking a photograph of the covered area where breakfast is served. If you stand outside in the broiling sun, the skin starts to singe almost immediately. Under a canopy, there is usually a breeze. Temperature range since I have been here is 84-76.

i start my day with coffee and breakfast by the pool at 7:30 and read my online newspapers, then shower and dress for the day, then  walk up a steep hill to a square to buy bottled water. Today being Saturday, there was a farmers market and with the exception of onions, cilantro and watermelon I did not recognize the other items being sold. 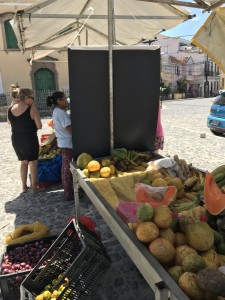 Usually around mid morning, I walk into the historic district , which is nearby but requires walking down a long, 45 degree hill and up another one: 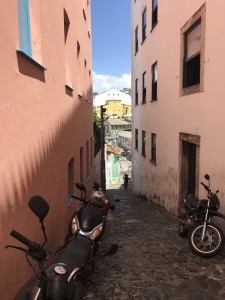 Actuslly, the above photo was taken on the return walk from the historic district back to my hotel, which you can see in the distance, the yellow building. I can always find my way  back to the hotel, even at night, because this route from the many one can take is notable for having motorcycle parking.  Also, there is a policeman stationed at the top of the street as well as at the bottom.

i wander the streets for a couple of hours before lunch, stopping in a cafe along the way for a lime and coconut drink and watch musicians. Always there are drums playing somewhere. An internationally famous drum school, Olodum, turns its students out into  the street to play to get practice in performing. Yesterday I watched an all tween girl  band.  At 11, they sounded like pros. And wore fetching red and gold costumes.

If there are cruise ships in the harbor, all the squares are packed around lunch time. Lines for restaurant seating are long. I made friends the first day here with an English speaking waiter at one of the restaurants so he saves me an outside seat for a 1:00 lunch and for an 8 pm dinner. Since all the restaurants have pretty much the same limited menu I do not miss out by not trying other places to eat. And, I enjoy the special treatment. I did discover a  “comida da kilo”  (food by weight) yesterday and it was the best food I have had in Salvador. Black beans and rice and luscious sliced tomatoes. And lunch was $3 as opposed to $25. Restaurants do not serve beans for some reason. Maybe because they are cheap.

Marcos warned me of the dangers of eating food fried in palm oil, which includes just about every Afro-Bralizian dish.  If you are not used to the heaviness, it may seriously upset the stomach.  Don’t want that.  The  Acaraje stands abound and I like to watch the cooks, all female, all wearing Bahian dress, throw this local specialty together.  First, the base, a round dough of chick peas, nuts and spices is deep fat fried in sizzling palm oil. When is is golden brown, it is sliced into six segments and spread with shrimp paste, pepper sauce, a stew of breadcrumbs soaked in coconut milk with ginger, peanuts, palm oil and onion and topped finally with dried, smoked shrimp (that you have to peel yourself). Doesn’t it sound delicious! Marcos worries about the shrimp from street vendors because  if the shrimp are not dried and smoked properly they will have bacteria and make you really sick. Think I will stick with beans.

After lunch, I usually walk back to the hotel and read for awhile then go on a three hour tour with Marcos. The last tour was on Thursday because he was going to the mountains on holiday. Yesterday I returned to one of the places we visited, the house of Brazilian writer Jorge Amado, which is now a museum. Most famous to Americans was his book, “Donna Flor and her Two Husbands”, which was made into a film in the 1970s. Amado went to a Catholic boarding school, became an atheist, was a Communist for a period of time and in later years, embraced Candomble, the traditional. Afro-Brazilian religion of Salvador (see previous blog post). 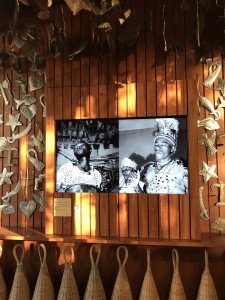 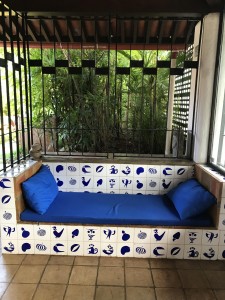 I return to the hotel again around 6 pm and read until it grows dark beside the fountain, pictured below. Cool, breezy, not buggy and comfortable. 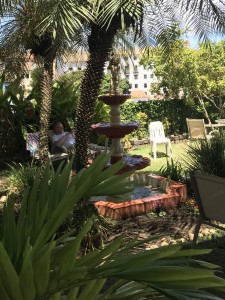 Then I walk back into town to have dinner, listen to more music, return to Pousada  and read until I fall asleep.

Tomorrow I fly to Rio. Being my last night here, I have decided to attend another Candomble service, this one from 6-9 this evening.  The ceremony cannot be filmed or photographed and observers must wear white.