On a Clear Day You Can See Forever

On a Clear Day You Can See Forever

The featured image is The Baha’i Temple of South America. I paid a private English speaking driver to take me there because it is on the outskirts of Santiago, 45” from my hotel and I feared my phone might not function to call Uber and I would be stranded. The interior is vast yet strangely intimate. Inspires the same sense of awe one feels when inside any grand cathedral. There were few tourists so I had the place pretty much to myself to sit and read the prayer book of Baha’i. There are prayers for women, for the poor, for volunteerism and for the belief that all religions have a a common element: the belief that there is something in the universe that is greater than oneself. Made of glass and marble, shaped like an upside down flower, it is constructed to transmit light. The temple is nestled at the foot of the Andes, 2000m above the city, so the view could be quite nice, if it were not for the air pollution caused by two million cars in a city of seven million people, plus a drift still from the Australian fires 9,000 miles away. 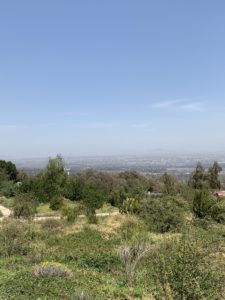 My driver suggested we go take a look at “ground zero”. You may or may not know that Santiago was to host two international summits in December, 2019. Both were canceled after the city raised the subway fare 3 cents in October and some of the citizenry revolted. The subway patrons, mostly lower middle class, took to the streets setting fires to the subway stations as well as buses. The rioters were careful to get people out of the way before they torched. The central downtown district is still under curfew. My driver said the place looks like Syria. I think, not quite that bad. Mostly the government buildings and houses of rich people were graffitied. 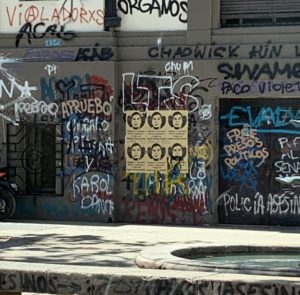 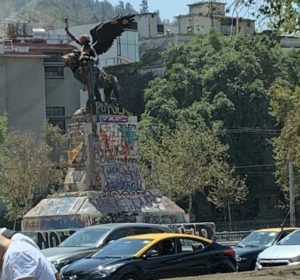 My hotel is situated in Providencia, which is a lovely suburb of Santiago with many parks. It is totally safe here during the day and evening. The hotel suggests not go downtown after dark. No worries! Except for museums I prefer to wander the central parks, especially the sculpture park which is enjoyed by families, students, runners and lovers… 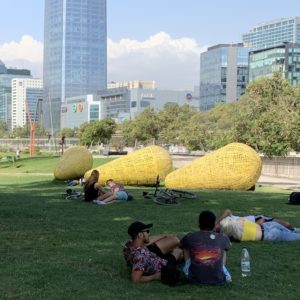 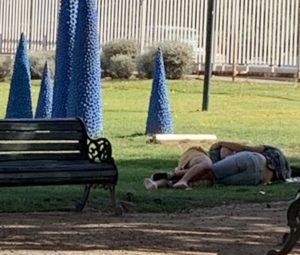 This is my first post since Iceland in December, 2018, so I am rusty. Cannot figure out how to delete one of the double photos but rather than obsess about it, I am sending this post anyway. A few people have worried about me! One more thing, my blog manager tells me that the subscribe button does not function. What that means is that you will not received my posts directly to your email. You will have to check back in with wherestarpley.com periodically.